Running dbatools as a REST API

Background - a testing framework with some infrastructure issues

A customer of mine have written a fantastic framework for automatically testing a monolithic application whose database runs on sql server. The framework uses playwright to make sure that the behavior of the application doesn’t regress. Playwright allows them to do things like finding information, changing information, and asserting that changes have been carried out as expected - while only interacting through chromium with the front end of the application. No APIs or database calls, just straight up telling their robot to look for element tags in what is rendered on the client.

To be able to decouple the test cases from each-other, I implemented SQL Server database snapshots about a year or two ago to restore data quickly. In an early implementation of this I would use PowerShell but I had not been exposed to dbatools yet. More on that later.

The basic structure is that before you start a batch of tests you would set up your database on an instance or on docker, run the application installer which would populate the base state of the application database, then add any base line testing data and lastly create the database snapshot. From there between each test the database would be restored to the snapshot.

It all worked most of the time but the testing team ended up taking ownership of the setup and restoration as I moved on to other things and they chose to implement it as custom tsql code running in their testing framework, to avoid calling PowerShell executables from dotnet. After a while they introduced functionality that then lead to some race condition issues and they sometimes ended up in wonky states while running the tests.

Meanwhile what I ended up doing was finding that the implementation that fits best is already inside dbatools with the New-DbaDbSnapshot and Restore-DbaDbSnapshot cmdlets.

My idea then became to take back the ownership of proper database handling for the testing, while still not having to add any PowerShell or tsql to the testing framework.

Enter Pode: A module for writing RESTful APIs (and more) with PowerShell.

Featuring dbatools to interact with the database

All running on docker, so that there is no new dependency while testing locally or in a build pipeline.

Not only do the testers no longer have to care about sql server internals, they can change the rest api for another type of database management if they would like to in the future run on something other than SQL Server.

Other teams and/or projects in the organization can leverage an API to perform tasks similar to this in other projects once they get comfortable with how easy it is to use.

Getting the image and setting up a demo environment

This example is using docker-compose which is included with docker desktop. If you are running on windows make sure you are using wsl2 to get it to work easily.

Create a new empty dir and step into it.

Create a .env file for the docker images to use

Create a docker-compose.yaml file as so 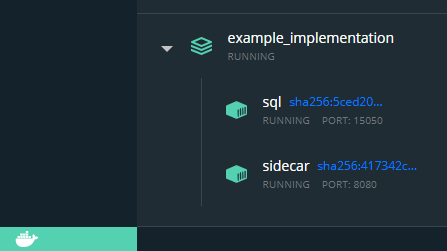 Things you can do with the example implementation

All of the methods in the API are GETs.

You can call the the rest endpoint with any http client. For example fetch api for javascript, a HttpClient in dotnet or plain Invoke-RestMethod in PowerShell (or Invoke-WebRequest for that matter if you are so inclined)

Running Ping like in the example above returns a message about the status of the sql server connectivity (using Test-NetConnection):

Running without a method name, just the root, will display a welcome message and give us the command palette:

As you can gather from this, there can be only one snapshot, and that is exactly the use case that you want most of the time.

How does it work?

Pode lets you define your endpoints with PowerShell that when invoked runs some PowerShell code on the server and sends data back to the caller.

By running it on a docker image with dbatools preinstalled, we can let those invocations carry out dbatools cmdlets before returning.

Here is an example straight from the source code of the docker image that describes what the server does when the /RestoreDatabase endpoint is called.

You can use .pode files to get more advanced and dynamic behavior.

You could either start from this reference base image for pode in docker and write your own applicaiton or extend upon mine by layering your docker commands on top of my image. The reference image was initially conceptualized by Doug Finke

Why not all of dbatools?

You could, given some time, rewrite the functionality to incorporate any cmdlet from dbatools, perhaps with limitations of things you cannot do with a sql login on a remote instance. To do it you would iterate through dbatools with

Simple, but not easy.