Beyond Minikube - setting up two raspberry pi with k3s to get experience with kubernetes.

The scope of this post is not to give an introduction to what kubernetes is or why to use it.

Chances are if you find this post that you want to build a physical cluster on your home network and practice deploying services to it.

We will be using k3s from rancher as our kubernetes distro.

This guide is intended for developers that use primarily Windows 10 and want an example of what setting up a physical kubernetes cluster is like.

I bought the two rasberry pi, usb-c cables for power, some cute ebony and ivory cases and micro SD-cards from https://www.inet.se/ (shout out to their webshop, expect more business from me).

Once the package showed up, me and Algaron87 unpacked everything and put the two raspberry pi into their cases. Algaron is my high school buddy / friend of the family / godfather of my children / all around good guy.

We unpacked the micro SD-cards and began flashing over a rasbian image that you can download here.

We mounted the image in windows and added an empty ssh file to the image before copying over to show that we wanted to use ssh in the future. (We killed the ability to log on with password in the future in the sshd_config file.)

I am using an old mp3 player accessory as a docking station for micro SD-cards.

The disk write software we used was Win32DiskImager, instructions in the raspberry pi documentation. 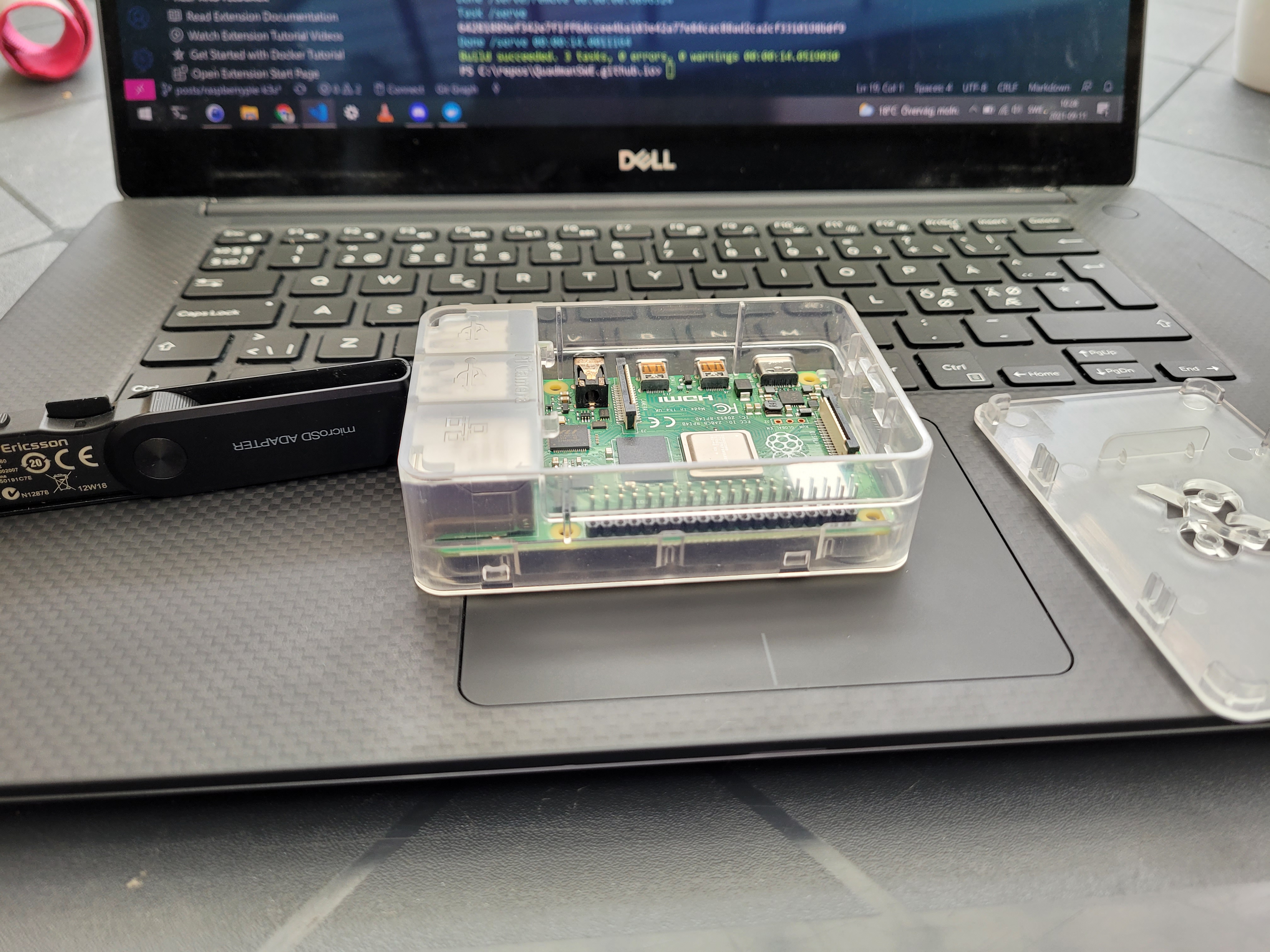 Configuring raspbian after boot on each node

The one named ds-pi-2 became the master node. (We assigned this by which was the first case we unpacked and somehow switched SD-cards around and got them confused!)

Adding this info to your local ssh_config file will make it a bit easier to keep track while boostrapping. Once the cluster is up and running the need to ssh to them diminishes.

Time to connect and configure each node, had I had three or more nodes I would look into automating this part further.

Reference this documetation on rasp-config.

📝 Not sure if it is an intermittent problem or if I appended to the cmdline.txt file improperly but I had to at least once remove an extra empty line from that file after writing to get container features running properly. Let me know on twitter if you have any input.

You should set your static ip on the nodes and not in your router like I did to prevent issues with DNS inside the cluster. I don’t care about that stuff and I live my life pretty much as a renegade (I am hiding an insecurity with my lazyness, don’t judge). 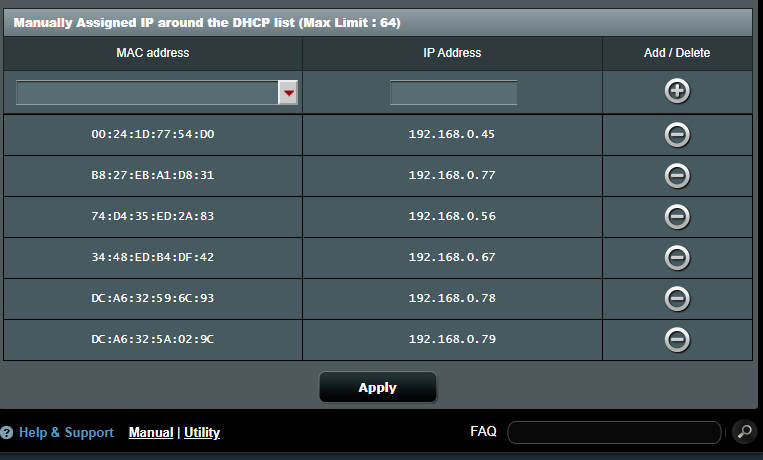 Installing k3s on the first node

We performed a proper reboot of the nodes by unplugging and replugging the two raspberry pi.

Let’s fire up windows terminal and ssh to the nodes.

These commands will initialize the cluster by downloading the script from the k3s site. Then it will output the token we need. 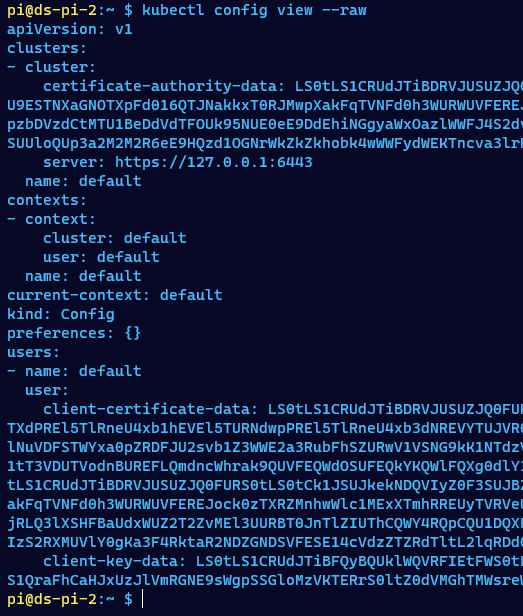 Installing and joining the other nodes

The tools I use to interact with kubernetes from windows 10

Let’s quickly go over my recommended way to interact with kubernetes form windows with powershell.

If you know anything about me you know about chocolatey.

kubectl is the command line interface for kubernetes, I will use it for most of the interaction with the cluster, as well as the vs code extension for a visualization.

Lastly I suggest for people who are comfortable with docker-compose to try out kompose which will translate yaml from the former to the latter so that you can deploy an application you are familiar with to kubernetes and see what gets created to facilitate your application.

Save the output from the config command you ran on the master node. Put it into a file named config under ~/.kube. Merge it if you have a file from before for one or more other clusters.

Now we can check out our deployment status with kubectl, it will use our configuration that we saved in the previous step.

The kube config we saved can also be leveraged by the kubernetes extension for vscode.

Now we can for example browse our nodes from here, and what they are running. I find this a great visual tool to learn how my deployments become entities in kubernetes and what yaml they produce internally. 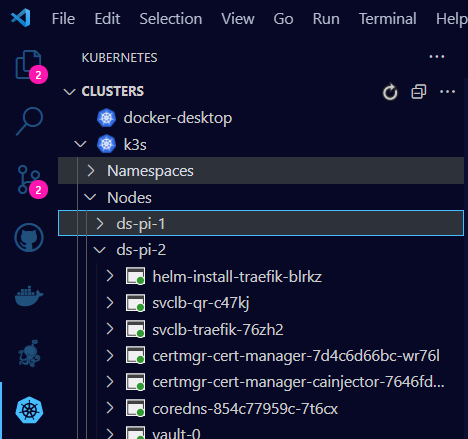 Straight up simplest web app of your life 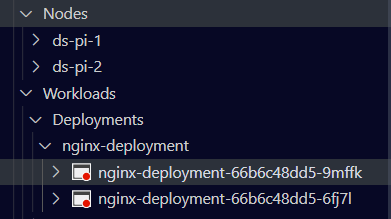 In a few short moments they will turn green, indicating they are in the ready state. 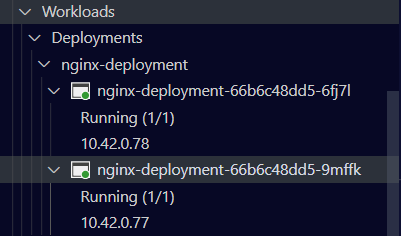 Something a bit harder, with helm

Note that when you install helm charts, that a lot of them contain images which are not built for the ARM architecture of our raspberry pi cluster. Your milage might wary. Here is a repo with a chart I built for a simple golang app that translates string input into a QR code png.

Now we can deploy the helm chart, --set key=value will overwrite a setting in the default values, I want to replace the default port 8080 with 17890.

When we run the helm install we get an output like so.

There we go, now I can get on demand QR codes form kubernetes.

Here is the output with a QR code that should point to this very blog post. Go ahead and scan it. 📷 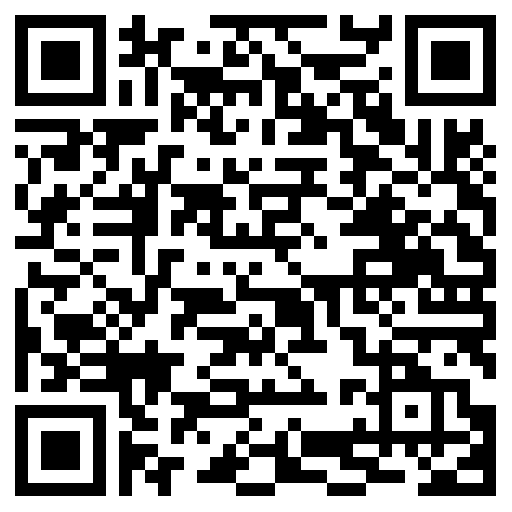 If you are interested in not only running helm charts but creating them, check out this great documentation.

If you like powershell like I do I’ve made my helm chart build script available on github.

Next time we will look at service meshes, Linkerd will be installed ontop of this cluster as a reference.